Let Me Be Frank 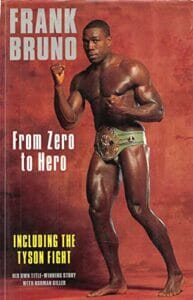 From Zero to Hero

When Frank Bruno is booked for webinars and virtual events, they are known to discuss the following speaking topics:

Let Me Be Frank

From Zero to Hero
Topics

When Frank Bruno is booked for webinars and virtual events, they are known to discuss the following speaking topics:

Former WBCA Heavyweight champion, Frank Bruno MBE is one of boxing’s biggest icons. He boasts a 95% knockout-to-win ratio, reflecting his immense strength, power and determination in the ring. When booked for virtual events, Frank inspires audiences to value their potential and talks openly about his battles with mental health illnesses. Discussing such topics as diversity, inclusion and mental wellbeing, an event featuring Frank will leave a resounding impact on viewers.

Frank took to the ring swinging, earning 21 consecutive knockout wins following his professional debut in 1981. During his career, he earned the European Heavyweight and WBCA Heavyweight titles, as well as a Gold medal at the 1980 English National Championships. Frank retired in 1995, concluding a gold-standard career in one of the sport’s most physically challenging disciplines.

He is one of the UK’s most popular boxers, thanks to his thriving media career. With his likeability and charm, and the unmistakable catchphrase “know what I mean, Harry?”, Frank solidified his place in the public’s heart, leading to a popular speaking career. He has made several on-screen appearances, including shows like This Is Your Life, Fort Boyard, The Alan Titchmarsh Show and The Weakest Link, as well as Rachel Bruno: My Dad and Me. The programme was a touching documentary presented by his daughter, that explored Frank’s mental health condition, Bipolar Disorder. Most recently, Frank relived his epic career alongside one of his most prominent competitors in the SKY documentary ‘Bruno VS Tyson’.

Throughout his career, Frank published several books, including Know What I Mean, Eye of the Tiger and From Zero to Hero. His award-winning autobiography was published in 2006, titled Frank: Fighting Back it was later recognised with a British Sports Book Award. His most recent book, Let me Be Frank, explores his long battle with mental health issues.  When booked for events, Frank reflects on the highs and lows of his careers, including the emotional hurdles he overcame. A pioneer of inclusion, he promotes the power of diversity, in both sport and business, an essential topic for corporate audiences.

Frank Bruno is regularly booked to engage audiences at virtual events, read their latest feedback below:

“Frank was charming and professional, everyone thought he was lovely. Please, could you pass on our thanks to him for making it a great evening.”

“Frank was an absolute Gent. Please pass on our thanks to him, we really could not have asked for any more from him. He was a pleasure to deal with from start to finish.”

“Just want to say a personal thank you to yourself and Frank for his work at the weekend. Without a doubt, one of the nicest people I have ever met, made the night for everyone and I can’t thank you enough. Everybody loved him.”

To enquire about Frank Bruno for your next virtual event or webinar, simply contact The Online Speakers Agency via agent@virtualonlinespeakersagency.com or call a booking agent on 0207 1010 553.