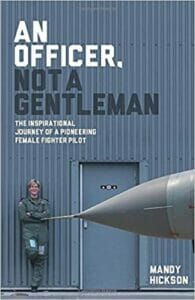 An Officer, Not a Gentleman: The inspirational journey of a pioneering female fighter pilot

When Mandy Hickson is booked for webinars and virtual events, they are known to discuss the following speaking topics:

An Officer, Not a Gentleman: The inspirational journey of a pioneering female fighter pilot
Topics

When Mandy Hickson is booked for webinars and virtual events, they are known to discuss the following speaking topics:

One of Britain’s most inspirational women, Mandy Hickson made history when she became just the second woman ever to fly a Tornado GR4. A hugely successful pilot she overcame adversity, and a patriarchal industry to achieve her dream of flying for the RAF. Mandy went on to lead an all-male squadron, something unheard of in the military, she also completed three tours of Iraq taking part in over 40 missions. Now, Mandy works as a virtual keynote speaker using her remarkable experiences to inspire audiences.

Risk management is vitally important in the air force, and one of Mandy’s greatest achievements was taking on the role of Combat Survival and Rescue Officer. Working closely with US forces, this position made her responsible for spearheading risk management efforts across different continents. Many of the skills and lessons she gained during her time in the RAF can be applied to the world of business, and in her capacity as a virtual speaker, Mandy often applies her experiences to tangible scenarios her audiences can relate to.

Achieving her dream certainly did not happen overnight. Mandy had to overcome more hurdles than most to reach her goals. Not only was she trying to break the glass ceiling in a notoriously male-dominated industry, but she failed her RAF aptitude test on two occasions making it even tougher to make the grade. Undeterred, she persevered and refused to give up, eventually fulfilling her life’s dream. As a virtual speaker, Mandy can inspire audiences all around the world.

Her speaking career led her to work with several women’s groups, including Inspiring Women for Work where she provides motivational talks about careers and skills. And in her virtual speaking role, she can spread her messages even further.

Mandy Hickson is regularly booked to engage audiences at virtual events, read their latest feedback below:

“Mandy is a fantastic public speaker. She is both inspirational and extremely well prepared. Her ability to relate her own experience working under extreme pressure and in high performing teams to everyday situations is most impressive. She tops it all with a wonderful sense of humour and great modesty. Listening to her talking about the many challenges that she has successfully overcome should be compulsory for all girls!”

“Much like the fighter jets you flew, the noise (feedback) about your presentation can still be heard. The feedback has been fantastic with many saying “Mandy was the most inspirational speaker I have ever heard”. You are extraordinarily talented, hugely determined and beautifully funny with a great ability to connect with people – for such a high flier you are very grounded! Thank you for sharing, it was a great pleasure.”

“Mandy, great to meet you. Your session was particularly well received. I am delighted I was able to stay to hear you talk. Your story is very inspirational and I recognised many of the challenges you have faced as a woman in a predominantly male world as these issues are industry agnostic. I am sure we could spend hours sharing our war stories (literal and metaphorical!). I do all I can to help the next generation navigate these challenges and not experience the same difficulties as those who have gone before. You are clearly doing the same.”

To enquire about Mandy Hickson for your next virtual event or webinar, simply contact The Online Speakers Agency via agent@virtualonlinespeakersagency.com or call a booking agent on 0203 9317 391.