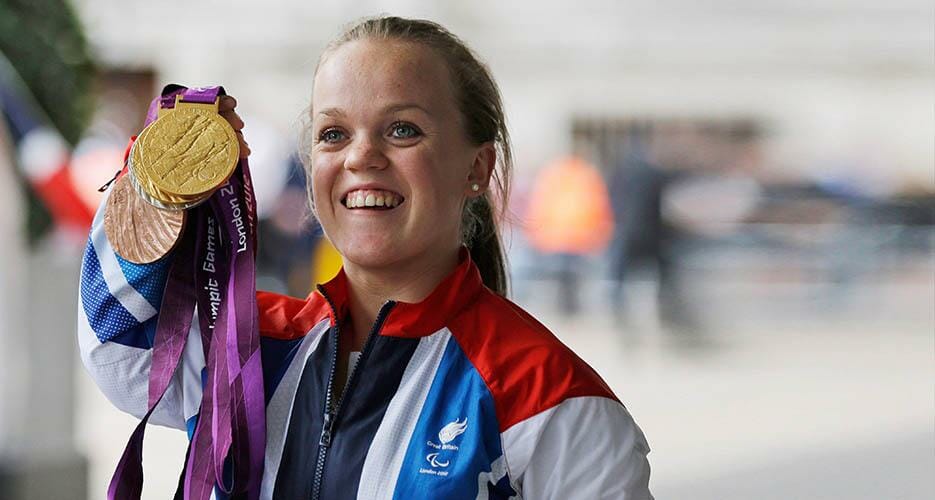 Inspirational Paralympian, Ellie Simmonds, is a powerhouse in the pool. The three-time competitor for team GB has defied the odds and gained some of the greatest results seen in the sport, despite her disability, a testament to her determination. Swimming in the S6 disability category, Ellie is internationally regarded for her technique, strength, and capacity which have allowed her to become a Gold medallist and World Record holder.

First joining the Paralympic team for Great Britain at the 2008 Beijing Games, Ellie, who was the youngest in the squad aged only 13, achieved an unprecedented two Gold medals in the freestyle event. Repeating her success on home ground in the London 2012 Paralympics and again at the Rio 2016 Games, Ellie has secured five Gold medals to date, proving herself a fierce and unrelenting competitor. Competing across freestyle, butterfly and individual medal, Ellie has also impressed internationally by obtaining two World Records, in addition to her total of 32 first-place finishes across all competitions.

Born with a form of dwarfism, achondroplasia, Ellie never let her height define her, and after undertaking swimming lessons as a life skill, found her fins in the water. An undeniable talent in the pool, from her first lesson aged five, it was only a matter of years before she went on to represent her country. With 10 World Championship titles to her name, and seven European, Ellie’s dominance in the sport is undisputed.

In 2008 Ellie received the BBC Young Sports Personality of the Year for her performance at the Paralympic Games, which was followed by an MBE in 2009, she was the youngest ever recipient of such an honour. A role model and inspiration for all, particularly those who face adversity, Ellie is empowering others through her sporting achievements, which she recalls as an online event speaker. With such a strong message a digital format does not hinder her impact, as she resonates with all who tune in.

To enquire about Ellie Simmonds for your next virtual event or webinar, simply contact The Online Speakers Agency via agent@virtualonlinespeakersagency.com or call a booking agent on 0207 1010 553.