How to Win: Rugby and Leadership from Twickenham to Tokyo 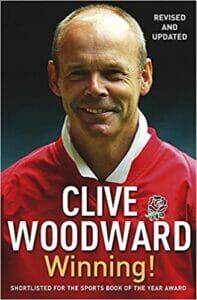 When Clive Woodward is booked for webinars and virtual events, they are known to discuss the following speaking topics:

How to Win: Rugby and Leadership from Twickenham to Tokyo

When Clive Woodward is booked for webinars and virtual events, they are known to discuss the following speaking topics:

Clive Woodward made his fame as the former Head Coach of the England Rugby Team. Leading them to some of their most prominent victories, Clive is the coaching genius behind England’s first World Rugby Cup win in the 2003 Rugby World Cup. With impeccable leadership skills and a likeable personality, Clive is also well known for coaching the team to two Six Nation victories, three Triple Crown victories and five Millennium Trophy victories.

In his early career, Clive had aspirations quite different from the course of his career. He originally applied for a degree in law at Durham University, but after being turned down began work at NatWest bank. Clive then began to play rugby, playing for clubs such as Harlequins, Leicester and the England National team. At the end of his playing career, Clive had secured 21 caps for England and developed a strong understanding of the inner workings of the game.

Other prominent roles of Clive’s include coaching London Irish, Bath and the British and Irish Lions. Clive has also spent time during his career as a football coach, leaving rugby behind to become the Performance Director of Southampton Football Club and later the Director of Football. Clive is also known for his role as the Director of Elite Performance for the British Olympic Association and Deputy Chef de Mission during the 2008 Beijing Olympic Games.

With an illustrious career behind him, Clive is now highly sought as a speaker for online events. Putting to use the skills that he honed as an elite sports coach, Clive covers topics such as what makes a champion, tackling change, winning cultures and in fitting with the current climate, navigating uncertain times. Previously, Clive has performed for the likes of Sainsbury’s, HSBC and Heineken, proving his credibility as an online speaker. A true team leader, Clive is confident and comfortable when leading virtual events, leaving each online guest captivated with his insightful content.

Clive Woodward is regularly booked to engage audiences at virtual events, read their latest feedback below:

“Sir Clive was a pleasure to have with us last Wednesday, he was very professional and personable and nothing seemed to be too much of an ask. Our clients CEO was extremely happy that the brief was met and enjoyed his company for the evening. The delegates remained engaged throughout the speech and enjoyed the Q&A where Sir Clive stood and answered questions and provided anecdotes of his career that were very entertaining. The use of slides and video clips were well used throughout and the clear link to his leadership style through business and sport was very well received. We would undoubtedly recommend Sir Clive to speak at future events”

“The whole night was a success but CW was the star attraction and there was a really good atmosphere from start to finish. Sir Clive was on time at 6:30 and stayed for drinks up on the walkway- and was spot on in between! Signed every book (all 70 went to new homes), gave an ‘inspirational’ presentation getting plenty of laughs too in the right places”

“It was a great pleasure to meet Sir Clive, and his presentation was incredibly well-received. His presentation was aligned perfectly with the day, while also being very engaging and entertaining. It was the key highlight of our meeting; excellent feedback was received all round. Please extend our thanks to Sir Clive once again”

“The session went really well and Clive was great. Lots of positive feedback”

To enquire about Clive Woodward for your next virtual event or webinar, simply contact The Online Speakers Agency via agent@virtualonlinespeakersagency.com or call a booking agent on 0203 9317 391.