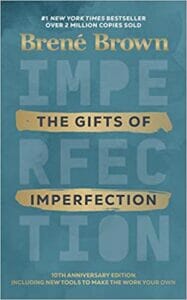 The Gifts of Imperfection

When Brené Brown is booked for webinars and virtual events, they are known to discuss the following speaking topics:

Dare to Lead
How Do You Cultivate Braver, More Daring Leaders?
How Do You Embed the Value of Courage in Your Culture?
Rising Strong
Armoured Leadership & Daring Leadership
Braving The Wilderness- The Quest for True Belonging and the Courage to Stand Alone
Emotional Intelligence

The Gifts of Imperfection

When Brené Brown is booked for webinars and virtual events, they are known to discuss the following speaking topics:

Dare to Lead
How Do You Cultivate Braver, More Daring Leaders?
How Do You Embed the Value of Courage in Your Culture?
Rising Strong
Armoured Leadership & Daring Leadership
Braving The Wilderness- The Quest for True Belonging and the Courage to Stand Alone
Emotional Intelligence
Videos

Brené Brown is best known for her expertise in emotional intelligence and for her five New York Times Bestseller books. Author of Rising Strong, The Gifts of Imperfection, Daring Greatly, Braving the Wilderness and Dare To Lead, Brené has written on a broad range of topics including the pressures of society to imperfections and failure. Brené is also well known for her position as a research professor at the University of Houston, with the Huffington Foundation Brené Brown Endowed Chair. She has also lent her expertise to the Austin McCombs School of Business, where she acts as a visiting management professor.

Brené first found interest in the workings of the human mind and wellbeing after studying social work at the University of Texas. Pursuing social work further, Brené then went on to obtain a PhD in social work. From that point on she began extensively researching the inner workings of the mind, focusing on courage, empathy, shame and vulnerability. As a researcher she re-joined her former university, working as a professor at the University of Houston.

Armed with her detailed research, Brené has become a highly sought public speaker. To date, she has delivered several top-performing TED talks, including the titles of The Power of Vulnerability and Listening to Shame. The Power of Vulnerability has become one of the most-watched TED talks, raking in an impressive 50 million views. Brené also became the first researcher to have a Netflix broadcast lecture, The Call to Courage explores stepping out of your comfort zone and being courageous. She has also appeared on the Super Soul Sunday with Oprah Winfrey and is CEO of The Daring Way training program.

A seasoned professional speaker, Brené backs her opinion with well-researched fact to deliver an insightful and engaging online delivery. Her adept understanding of the human mind provides great takeaways for business leaders, helping them to better understand their employees. A speaker with a proven track record from top companies such as Shell Oil Company and Mondelez International, Brené is the perfect choice for online events.

Brené Brown is regularly booked to engage audiences at virtual events, read their latest feedback below:

“Our session with Brené was overwhelmingly positive and our leaders commented on what a great experience it was. Our survey results indicated she received the best ratings for external speakers that we’ve had in the last two years. Her content is applicable to our professional and personal lives, men and women alike. Her message about vulnerability is re-shaping our conversation about what it means to be a good leader- we were surprised by how engaged and excited our team was about the message!”- Home Depot

“A unique experience for hard-charged senior executives- one which allowed the team to look at leadership from a very different, very personal perspective. The concept of Daring Greatly, combined with wholehearted and being vulnerable opened up their willingness to step out of their comfort zone and step change how they will lead in a high growth company”- Mondelez International

“Today’s global economy is forcing business to increase productivity and efficiency while reorganizing to reflect the global landscape. Brené’s research on connection, empathy and vulnerability in the workplace helped us better understand how the emotional consequences of change play out in the workplace, and how to more effectively engage with one another. She delivers important messages that is supported by original research and does so in an engaging and intelligent way. Leaders at all levels of the organization come away with a new framework for looking at these issues and making effective changes to how they lead”- Shell Oil Company

To enquire about Brené Brown for your next virtual event or webinar, simply contact The Online Speakers Agency via agent@virtualonlinespeakersagency.com or call a booking agent on 0207 1010 553.