Discover Stanley A. McChrystal's biography of published work below. 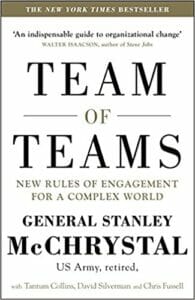 Team of Teams: New Rules of Engagement for a Complex World

Discover Stanley A. McChrystal’s biography of published work below.

Team of Teams: New Rules of Engagement for a Complex World
Videos

A former US Army General, Stanley A. McChrystal has experience serving in some of the most hostile warzones in the world. Over the course of his, career Stanley has held a whole host of senior military positions and used these experiences to write several successful books detailing his time in the Army. As a virtual speaker, he often shares the core skills of leadership, teamwork, and resilience to audiences sharing with them the qualities that stood him in good stead for over three decades of service.

During his military career, Stanley was part of hundreds of life-threatening situations, having to use every ounce of his training to stay alive. This included the Operation Desert Shield mission and he also played an integral role in the capture and downfall of the infamous tyrant, Saddam Hussein. These successes have seen him receive many honours including the Army Distinguished Service Medal, Army Achievement Medal, and the Global War on Terrorism Service Medal.

After he completed his military training in the 1970s Stanley was announced as a Second Lieutenant of the United States Army. It wasn’t long until he’d progressed through the ranks holding several positions including General Officer and Chief of Staff at the Pentagon during the Iraq War in 2003.

Since retiring in 2010 Stanley splits his time between inspiring public speaking and publishing books outlining his experiences. Some of the books he’s published include Team of Teams, My Share of the Task, and The Operators which was transformed into a film by Netflix with Brad Pitt portraying Stanley. In his capacity as a virtual speaker, Stanley can adapt the skills he learned in the military to a corporate environment inspiring businesses to work together and thrive. Even through a screen audiences hang on to every word of this true American hero.

To enquire about Stanley A. McChrystal for your next virtual event or webinar, simply contact The Online Speakers Agency via agent@virtualonlinespeakersagency.com or call a booking agent on 0207 1010 553.