When Naga Munchetty is booked for webinars and virtual events, they are known to discuss the following speaking topics: 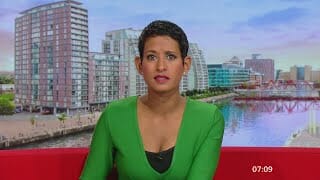 When Naga Munchetty is booked for webinars and virtual events, they are known to discuss the following speaking topics:

The face of BBC current affairs, Naga Munchetty has been delivering the latest news to viewers of the broadcaster for over a decade. Recognised for her insightful reporting and professionalism, Naga’s reputation is one of the most established in the industry as she continues to grow the audience reach of each programme she presents.

Since 2014 Naga has fronted BBC Breakfast, a leading figure on the current affairs circuit, Naga’s influence on the reporting of news across politics, finance and culture has seen her become revered for her role. Equally accomplished as the host of Newsnight, Victoria Derbyshire and formerly the BBC World News, Naga’s ability to transform complex topics into accessible segments ensures she is popular across audience demographics.

Having gained a Master’s degree in newspaper journalism, Naga embarked on a career with the City Pages of the Evening Standard and The Observer before specialising in financial journalism. Taking to the small screen, Naga’s first role was on Reuters Financial Television as a reporter, moving on to feature on CNBC Europe, Channel 4 News and as a Senior Presenter for Bloomberg, Naga established herself as an international expert in her field.

An experienced virtual facilitator and host, Naga’s other media appearances, including on Strictly Come Dancing, Celebrity Mastermind and Radio 4’s Money Box ensure instantly recognisable at events. Showing personality during professional engagements is a skill Naga as mastered and brings to her work as an online events host, able to engage audiences and maintain the structure of an event. For a proven professional with decades of expertise, organisers cannot miss the opportunity to book Naga Munchetty.

Naga Munchetty is regularly booked to engage audiences at virtual events, read their latest feedback below:

“She was fabulous, everything we can ask for, she was so committed with the cause and the night. We can’t say enough thank you to her!”

“You were amazing. We were over the moon with how you delivered the stage presentations and thanks for all the scripting you were involved in, not to mention playing golf with us afterwards.”

“Thank you for your outstanding performance during the Forum. You did a wonderful job moderating panels that dealt with technical and not always easy topics. You made the panellists feel very comfortable on stage, you managed to keep the audience interested and us in the back relaxed and assured that everything would go well. Your positive spirit, uncomplicated and friendly nature were highly appreciated!”

To enquire about Naga Munchetty for your next virtual event or webinar, simply contact The Online Speakers Agency via agent@virtualonlinespeakersagency.com or call a booking agent on 0207 1010 553.